Posted at 14:22h in News by VS Veicoli Speciali
3 Likes
Share

If you read articles related to the world of commercial vehicles and transport, it happens quite often to read the name “tuk tuk” wrongly referred to a picture of an Apecar, the iconic vehicle that Piaggio manufactured since the end of the ‘40s.

If it is true that both of them are three-wheelers and vaguely have a similar shape of their body, it is also true that their function and their public consideration at an international level are very different since the very beginning.

The word Tuk Tuk is used to describe a three-wheeler motorbike to which a small wagon is attached and is used as a taxi in many cities in Asia, in particular Bangkok, where is now a touristic icon.

The name is onomatopoeic and comes from the typical noise that the engine used to make. The Tuk Tuk started to spread during the ‘50s and reached success during the next decade. 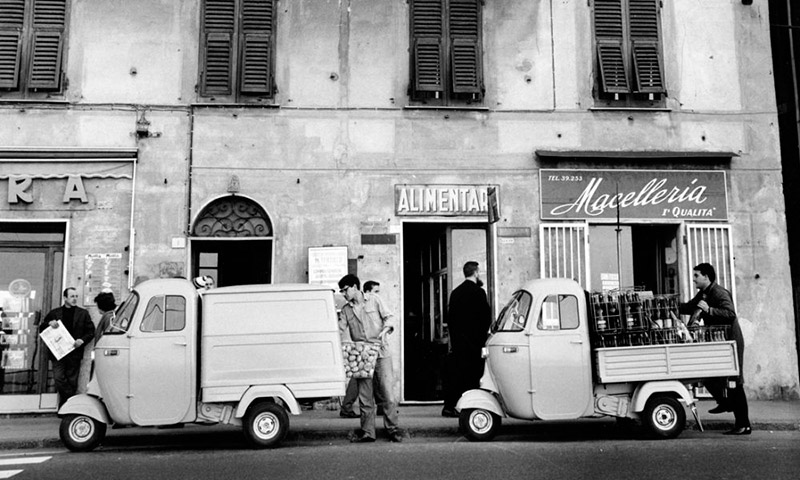 The Tuk Tuk is the motorized heir of the samlor (sam=three, lor=wheel, in Thai language), a bicycle linked to a rear cabin on which passengers sit. 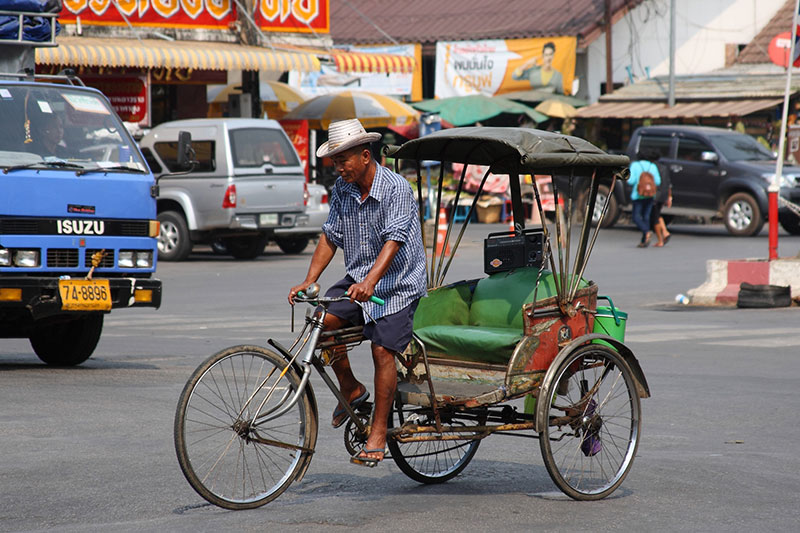 The samlor in turn is the heir of the rickshaw, the chariot pulled by one man carrying one passenger that started to spread in Thailand after a rich Chinese merchant showed it to King Rama V in 1871. Its success among the many people that couldn’t afford a horse to ride the muddy streets of Bangkok was immediate.

It seems that the first rickshaw was built in 1869 by an American blacksmith, Albert Tolman, for the missionary Jonathan Scobie, an American Baptist minister who used it to transport his sick wife on the streets of Yokohama. 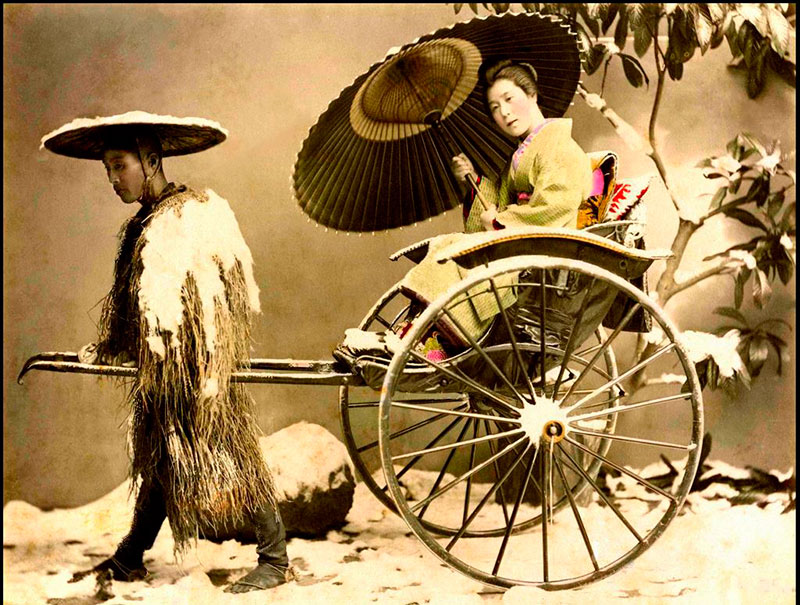 The English term rickshaw comes from the Japanese “jin-riki-sha” that means “man-drawn vehicle”. The Japanese, on the other side, were the first to connect the chariot to a moped, creating the first actual Tuk Tuk.

The journey from the rickshaw to the samlor to the tuk tuk clearly shows how since the beginning this vehicle was destined to transport people in a city.

Ape is a three-wheeler first manufactured by the company Piaggio in 1948 that became a symbol of the Italian aesthetic taste and design in the world.

It was invented in afterwar Italy as a cheaper alternative to the 4 wheels commercial vehicles.

The core idea, in order to keep low production costs and to provide an affordable vehicle for a poor country banged-up by the war, was to mount a wagon, later a box van, on a scooter, thus creating a three-wheeler.

The first models were built on a Vespa to which was towed a small trailer. For this reason, people started to call it VespaCar, still used in French-speaking countries. 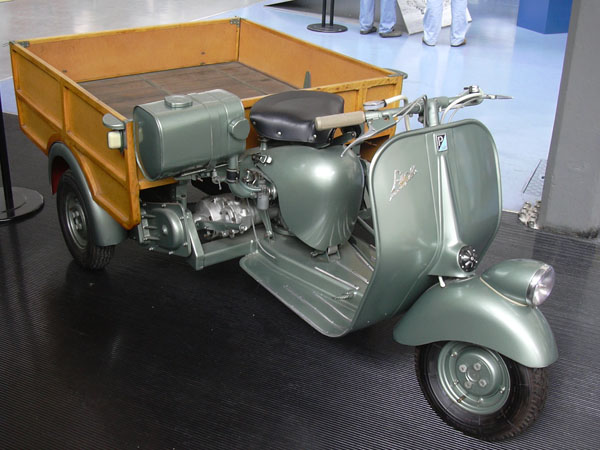 From the beginning, the Piaggio models had a commercial function and they were addressed to companies and independent business owners. Ape was meant for transporting raw ingredients, semi-finished or finished products, not people, like Tuk Tuk and its predecessors.

The only model that Piaggio produced at the scope of transport passengers in specific contexts is the Ape Calessino.

Otherwise, from the first Ape A, similar to a Vespa with box, to the Ape TM, to the Ape 50, Ape MP, until the ApeCar Van and the Ape Classic, still in production, Piaggio has always kept the focus on the commercial usefulness of the Ape.

This is the reason why Ape Piaggio is appreciated, now more than ever, by peddlers and companies that exploit the transport capabilities, leveraging on its iconic value.

The international success of the Piaggio food truck

Now a vintage vehicle in its oldest versions, the Ape Piaggio is still in production because the market requires it and companies appreciate its characteristics. 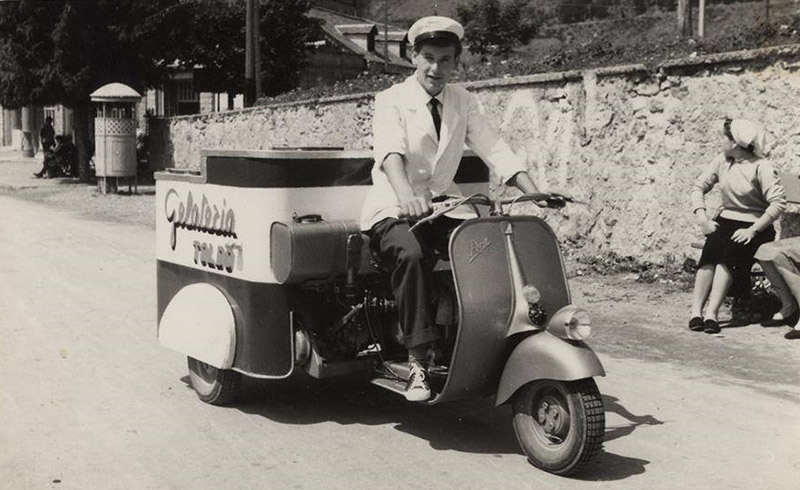 The design and the aesthetic qualities of the Ape Piaggio, together with its commercial functionality, make it suitable to transport products for sale or exhibition, but also to be converted in modern food trucks with professional kitchen and outfittings for cooked or fresh products.

For at least the past 10 years, street food has become a trend again, not only for small itinerant business owners that create elaborated activities (shops and mobile restaurants) but also for companies with multiple dimensions and sectors that now use street food to enlarge their business and promote their brand.

For this second purpose, more focused on promotion than on selling, is now becoming popular the concept of Promo Truck, i.e. a vehicle that, selling or not selling street food, drives around the streets or attends events primarily to advertise new products or to promote a brand.

In all these different contexts, Ape Piaggio proves to be a perfect mix of design and functionality: transporting, exhibiting, selling products or services with elegance and a sure visual impact. Everywhere it shows up, it catches the attention and interest of the passers-by.

Is there anything better to get noticed than street marketing in its more efficient form thanks to the more modern versions of the Piaggio truck? 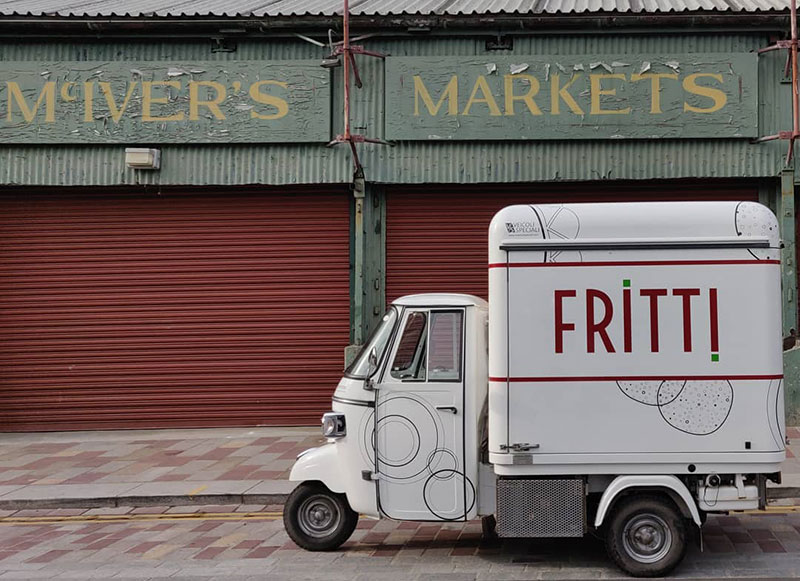 Patented by VS Veicoli Speciali, thanks to its rounded roof it’s a jewel of design that is always in the spotlight in any context you use it. It is sold everywhere in the world and it is the most requested product for its flexibility and elegance. 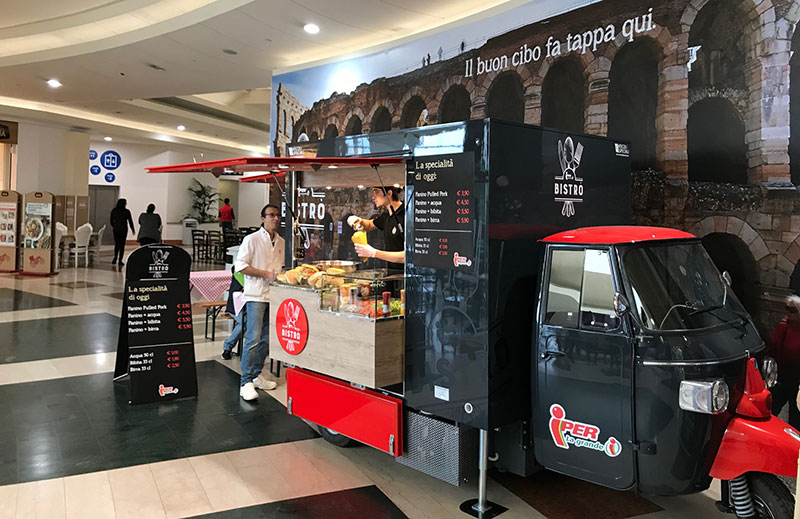 A vehicle without the engine patented by VS Veicoli Speciali that can bring all the advantages of the Ape Piaggio inside public and private locations. It can be placed everywhere, for Ape TR doors are open at shopping centers, train stations, airports, car dealers, museums, hotels and resorts, casino and conference centers… 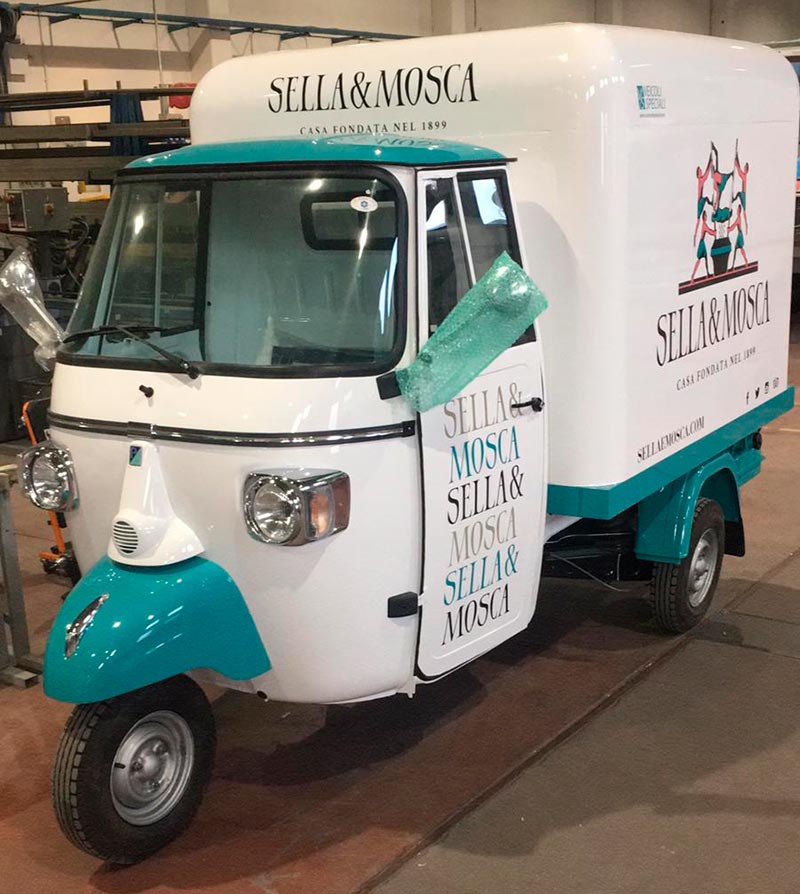 It is the substitute of the Ape TM van, now out of production, and allows to provide an efficient and special delivery service in historic city centers and towns where its small dimensions and the easiness to move make a difference. Another patent of the innovative VS Veicoli Speciali.

Three examples to tell the historic exceptionality of the Ape Piaggio, a vehicle that for more than 70 years has contributed to move the economy, with a continuous renewal.

Can you still mistake it for the little funny Tuk Tuk?