Posted at 14:03h in News by VS Veicoli Speciali
2 Likes
Share

Among coffee lovers, who doesn’t know Caffè Vergnano? An Italian company born in Chieri, in the province of Turin, in 1882, on the initiative of Domenico Vergnano, who opened first a small grocery shop and after a few years of rapid growth, he inaugurated the first stores in Chieri, Turin and Alba.

However, it was only in the 1930s that he purchased a coffee farm in Kenia. A lot has happened from that day and today Vergnano is one of the most popular and appreciated coffee roasting business of the sector, exporting its products in half of the world and with shops in dozens of countries.

Apart from selling and distributing coffee, for a few years the company is carrying over a project of creating Vergnano cafeterias around the world. The aim is to promote the brand internationally by selling quality products in shops that have a strong commercial identity.

For example, in the last few months, in Rome, Vergnano inaugurated 3 cafeterias: one in the central Piazzale Flaminio, another in the popular district of Trastevere (restoring an old 50s cafeteria) and the third at Terminal 3 of Fiumicino Airport. 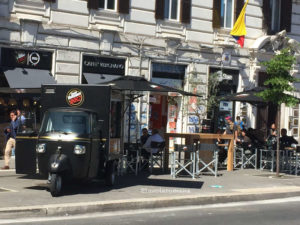 Rome is part of a big growing plan that at the moment includes 120 cafeterias in the whole world and in the next months will see the opening of new coffee-bars in Cyprus, Qatar, Netherlands, Russia and Greece.

The cafeterias are decorated with elegance and taste, fully personalized with a constant focus point: the espresso machine Elektra Belle Époque, which became a symbol of Caffè Vergnano 1882 coffee-bars. 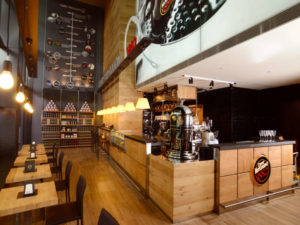 More than just simple coffee-bars, they are places where people can enjoy tastings and meet up, where drinking coffee becomes a savour experience and aside from the coffee, you have a wide range of sandwiches, tramezzini and warm dished with the best fresh Italian ingredients. Quality products only, realized every day in the open kitchen.

To satisfy also those clients who are on a rush, Vergnano cafeterias have a Grab&Go space where they also sell products off the shelf, branded “Caffè Vergnano”, of course.

The international expansion plan with cafeterias is extending to a complementary project that can give private citizens the chance to buy an Ape Piaggio outfitted as an itinerant coffee shop, to recall the Vergnano 1882 bar concept but on 3-wheels.

Here VS Veicoli Speciali comes into play, since Vergnano choose VS as a partner, to bring the cafeteria concept on the Ape as a synthesis of modernity and tradition, elegance and familiarity. This long time collaboration includes the realization of a series of mobile coffee shops installed on Ape Piaggio TR, specifically thought for inside locations strategically placed around the world (shopping malls, stations, airports…) or that can be used as itinerant cafeterias to meet clients in different contests.

A private citizen that likes the idea buys a branded Vergnano Ape TR with a specific design and signs a contract for the supply and loan for use of Vergnano coffee machine and grinder. 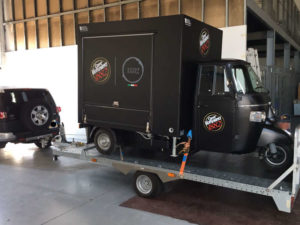 The first Ape TR coffee-shop that VS and Vergnano realized was placed in the Munich Airport. The second was delivered a few days ago and is going to leave on a presentation tour.

The Caffè Vergnano Piaggio Ape is outfitted as a true Italian cafeteria: the wooden counter with refrigerated display and backlit logo (in the mat black tone that connects the whole brand), the espresso machine with grinder with the Vergnano blend.

Moreover, it’s an independent outfitting, that only needs the electric connection. 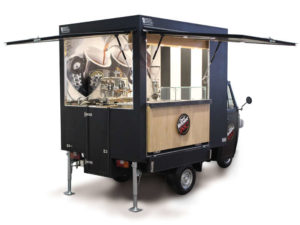 The italian concept of mobile coffee shop outfitted on an Ape Piaggio TR communicates a strong brand identity in a more flexible and creative way compared to the traditional cafeterias.

The Piaggio coffee-bar can be placed in stations, airports, shopping malls, gas stations and can also be used in exhibitions and events, private and public celebrations. The range of possible uses is wide and the big advantage for private citizens is to leverage the strength of Vergnano brand to grow their own business.

Thanks to its original design, studied into small details, the Ape Cafeteria is very attractive for the public and eye-catching for by-passers; it communicates creativity raising profits at once, which is good for all: Vergnano, VS Veicoli Speciali, business owners and, of course, clients.